The arrival of the month of June is not only marked by longer lasting days and shorter nights, but also by the appearance of rainbow flags everywhere. We can see them waving from flagpoles and hanging on the side of buildings. There’s no doubt about it: Pride Month is here. The rainbow flag is used by members of the LGBTQ+ community and its allies to showcase their support of queer people. Pride Month is a tradition that started in the United States. It’s celebrated every June to memorialise the Stonewall uprising of June 28th, 1969. The Stonewall Inn is a queer bar in New York City, which is a safe space for members of the community. At that time, raids of queer bars were not uncommon as it was illegal to employ people of the queer community or even serve them. However, that night the crowd fought back. It did not start the queer rights movement but was a significant turning point in the movement. Now LGBTQ+ pride is celebrated in many places around the world, held to honour the impact of the queer community and its history. Nevertheless, the celebratory occasion is also used by companies in order to increase sales.

Rainbow capitalism is a strategy that companies employ in order to appeal to the LGBTQ+ community. They use the rainbow flag in order to capitalise on the queer market. This is most apparent during Pride Month, as enterprises slap a rainbow on any conceivable item in order to increase their sales. The issue with this is that it’s more of a PR stunt than it is them actually promoting queer rights. They portray themselves as being allies of the community but don’t really do anything to improve or support the lives of people in the community. Firms are using Pride Month, which is meant to commemorate the achievements and the struggles of the LGBTQ+ community, to increase their own profit. It may even be that these same companies are actively harming the community, but are masking their actions with the use of the rainbow flag. The issue with rainbow capitalism is that the usage of rainbows is merely performative. Because businesses plaster rainbow flags on their products, one might mistake it as a form of pro-pride activism while in fact, they are not doing anything to benefit or support the LGBTQ+ community. 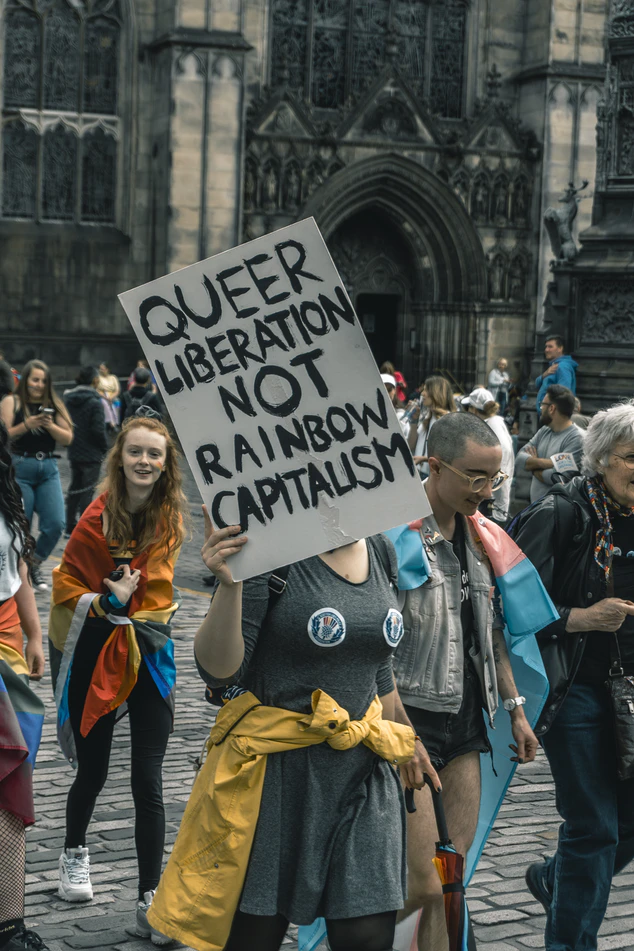 One form of rainbow capitalism includes multinational corporations changing their logo to feature a rainbow. However, these logos are changed only in countries where Pride Month is more acceptable, like the US and the UK, and not in less supportive countries, like Poland. Along with the appearance of rainbow logos throughout the month, pride merchandise is suddenly sold practically everywhere, making your shopping experience a vibrant collection of colors. For instance, Adidas has a pride collection, yet was also a main sponsor of the 2018 World Cup in Russia, a country with anti-LGBTQ+ laws. Similarly, many of these corporations that sell pride-related items in June do not back the symbolic normalisation up with actions – such as employing LGBTQ+ individuals or lobbying against anti-LGBTQ+ laws. Another example of this is the company AT&T, which encourages people to celebrate Pride Month and boasts about donating to the Trevor Project. However, the company simultaneously funds politicians that strictly oppose same-sex marriage. Not to mention that their rainbow logos and products magically vanish the second that the month of June ends. If these firms were true allies of the community, they would promote queer rights everywhere and at all times, not just where or when it’s fashionable to do so.

The prominent usage of rainbows during Pride Month suggests increasing support for the LGBTQ+ community. Unfortunately, this support is usually limited to the respecting of the rainbow flag during the month of June and in welcoming spaces only. Many actors are hesitant to cross the line into full on advocacy, which could result in backlash from anti-LGBTQ+ individuals or politicians. Still, the best support corporations could offer is not to create a rainbow version of every product, but to donate to impactful projects, collaborate with queer-owned businesses, and hire people of the queer community. Until then, the pride collections of Walgreens, Adidas, H&M, Nike, Apple and many more will continue to be in bad taste. The queer experience is not a trend and should not be exploited.